-Video released by The Fact.

–Choi Jong-hoon, who is living a devout life of faith.

–Choi Jong-hoon, a member of the group FT Island, was released last year after serving two years and six months after being arrested on charges of gang rape in 2019.

The Fact posted a video on the YouTube channel on the 12th with the title, “‘Jung Joon-young’s group chat room’ Choi Jong-hoon, 2 months after release…’ Gaegwacheonseon?’”.

This video was filmed on the 9th. In the released video, Choi Jong-hoon attended a church service in Seoul with his mother.  After the service, Choi Jong-hoon showed a bewildered look when the reporter asked, “How are you doing after being released?” He then replied, “I’m sorry” about his plans to return to the entertainment industry.

When asked about the reason why he joined the church, Choi Jong-hoon said:

“How did you come to know about it? Through who (do you know), people in the church are leaking my information like this.” 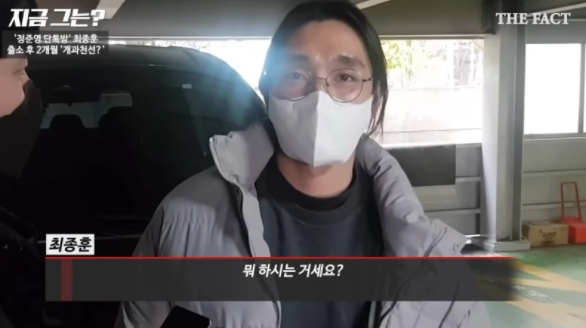 To the reporters pointing at the camera, he reacted furiously, saying, “What are you doing?” Immediately after singing “Mom”, his mother approached reporters and asked, “Why is that?” His mother said.

“It’s a big deal. (If this is the case) I will be scolded by God.” “The conclusion will be all right later. Let’s see”, “There is a part of it that is embarrassing”, “You will know when the years pass,” he raised his voice. After that, the two left quickly.

Previously, Choi Jong-hoon was handed over to trial on charges of gang rape and illegally filming singer Jung Joon-young, former MD of Club Burning Sun, Kwon, a former employee of an entertainment agency, and other women between 2015 and 2016 in Hongcheon and Daegu, Gangwon-do.

Afterwards, Choi Jong-hoon was sentenced to two years and six months in prison, and was released from prison in November last year.

Jung Joon-young, who was sentenced to five years in prison for the same charge, is expected to be released on October 1, 2025. 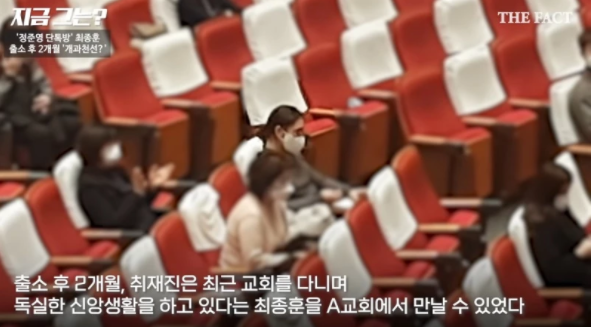 Singers Jung Joon-young and Choi Jong-hoon, who were handed over to trial on charges of participating in a group sexual assault with KakaoTalk group chat room members and distributing illegally filmed sex videos, were also sentenced to prison terms at the appeals court.

The 12th Criminal Division of the Seoul High Court (Presiding Judge Yoon Jong-gu) sentenced Jung Joon-young and Choi Jong-hoon to 5 years in prison and 2 years and 6 months in prison, respectively, on charges of violating the Act on Special Cases concerning the Punishment of Sexual Violence Crimes on the 12th.

The first trial sentenced Jung Joon-young and Choi Jong-hoon 6 years in prison and 5 years in prison, respectively, saying, “The defendants are not very old, but the crime is too serious and serious to say that it was a prank out of curiosity.”

Choi Jong Hoon has been sentenced to prison on charges of aggravated rape (refers to rape involving two or more perpetrators).

On November 29, Judge Kang Sung Soo of the Seoul Central District Court issued the verdict against five people, including Choi Jong Hoon. The courts sentenced Choi Jong Hoon to five years in prison, finding him guilty of sexually assaulting a person who could not resist. He will also have to undergo 80 hours in a sexual violence rehabilitation program and face five-year employment restrictions in any organization related to children and adolescents.

The prosecution’s request to place the five defendants under protective supervision was denied. Five people, including Choi Jong Hoon, were charged with aggravated rape in Daegu province in March 2016. They also faced charges of filming and spread illegally filmed material during that time.

The prosecution requested five years for Choi Jong Hoon, as well as participation in a rehabilitation program for offenders and a ten-year employment restriction in any organization related to children and adolescents.

Choi Min-soo’s current condition after his motorcycle accident brings sad news to everyone around him.